The Maria Cristina hotel, opened in 1912 by the Queen Maria Cristina, is one of San Sebastian´s grandest hotels, decorated in the style of Belle Epoque. It is located in the heart of the city, next to the Urumea River and within walking distance of the old historic quarter, the Concha and Zurriola beaches and the main shopping district.

It's also the place to be during the film festival when it plays host to national and international film stars, film directors and journalists.

It has 108 rooms, 28 suites, and 5 meeting and banqueting rooms which can accommodate up to 700. The hotel also has a Wellness centre, opened in February 2005, with a pool with hydromassage area, sauna, steam room. It also offers a range of beauty treatments.

The Easo Restaurant and Gritti bar both offer traditional Basque cuisine aswell as The Café Saigon, a Vietnamese Restaurant, which offers guests the opportunity to try something a little more exotic. 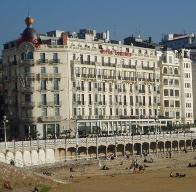 The Hotel Londres, built in the 19th century and recently renovated, is one of San Sebastian´s most prestigious hotels. It is situated facing the beautiful Concha Bay in the heart of the city. The room are decorated in a classical style, each with a marble bathroom. Not all rooms have a seaview so remember to ask when reserving.

There is a bar which has an outside terrace where you can enjoy watching the world go by, popular both with hotel guests and the people of San Sebastian. There is also a restaurant 'Brasserie Mari Galent' which offers traditional Basque cuisine (not recommended for vegetarians).

It has 148 rooms and space to accommodate business meetings, family celebrations and parties. 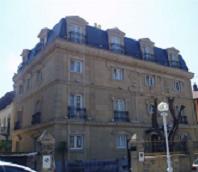 The Hotel Galeria is situated in the exclusive district of Ondaretta just a minute´s stroll to Ondarreta beach. This small hotel is decorated in late 19th century French style. Each room is dedicated to a famous artist such as Picasso or Dali which is reflected in both the decor and the furniture. Although not centrally located it is only a 20 minute walk along the seafront to the city centre.

The Hotel Aranzazu is located in the tranquil Ondarreta neighbourhood just a short stroll from the beach. It is also one of San Sebastian's most modern hotels.

There are 180 rooms each with the most up-to-date facilites. The Hotel, member of the well-known NH chain, also has meeting rooms with a maximum capacity of up to 400 people. It has a cafe and the Kuluarri restaurant offering the latest in Basque cuisine and its own car park. 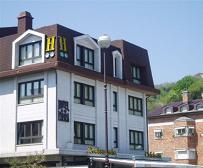 This hotel, opened in 1994, occupies a great location opposite Ondarreta beach in the exclusive Ondaretta neighbourhood. It´s just a 20 minute walk into the city centre along the Concha bay promenade.

The hotel has 30 rooms some with seaviews. There is also a cafe with a terrace facing the beach. The restaurant offers traditional Basque cuisine and offers a well priced lunchtime set menu popular with locals. There are also rooms available for business meetings and family celebrations. The hotel has its own closed car park.

Although the hotel only has 2 stars and is not as luxurious other hotels in San Sebastian its great location makes it a good choice for a short break in the city.