What to do and see in the Bermeo? 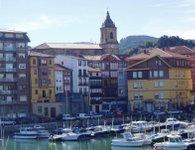 Bermeo is one of the most important fishing villages in Vizcaya. Its attraction lies in its history, its buildings, its traditions and the old part of the village which is characterised by narrow, winding streets.

Situated between green mountains and the Cantabrian sea this typically Basque village stands out for its beauty and tradition. This part of the coastline has steep, dramatic cliffs. Cabo Matxitxako, an extraordinarily beautiful rock formation with a lighthouse at the end, is just 5 kms from Bermeo. There are a number of low lying beaches along the Guernica estuary, clearly visible from here. Bermeo was the first village in Vizcaya, founded by López de Haro and Dña Urraca. It dates back to the 13th century although documents have been discovered that suggest it was an important place centuries before. Fernando el Católico proclaimed Bermeo to be the "Cabeza de Bizkaia", (the head of Vizcaya), reflecting its important in the 15th century.

Despite a number of serious fires in the middle ages and having to fight against the growing influence of nearby Bilbao, Bermeo maintained its status and prospered in the 17th century having the largest fleet of fishing boats in the whole of Spain. In fact even today it is still one of the most important fishing villages in Spain. Monuments and things to see in Bermeo: