What to do and see in Andorra?

Andorra is located in the middle of the Pyrenees between Spain and France. It is one of the most mountinous areas in Europe as well as being one of the smallest countries covering just 468 km2.

Andorra has a typical climate for a mountinous area - very cold winters, with a lot of snow and cool summers with pleasant temperatures. 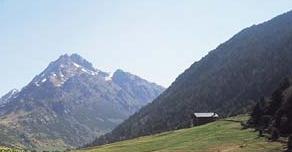 It has a population of approximately 68000 inhabitants, although this figure goes up considerably in high season. Only 36% of the population is made up of people with Andorran nationality the rest being 37% Spanish, 13% Portuguese and 6% French as well as other nationalities. The average age of the population is just 37 years old partly due to the fact that Andorra's economy is based on Tourism and commerce.

This is Catalan although Castellano and French are also used.

The country is divided into 7 towns known as 'parroquias':

Andorra has become a popular tourist destination above all famous its skiing resorts - it has the highest number of ski slopes in the whole of the pyrenees with over 200kms.

It is also a popular destination for rural tourism given its beautiful landscapes. It has beautiful places to relax in and wonderful scenery as well as offering the possiblilty of all doing all types of sports. Given that goods are all tax free in Andorra it is also a popular place to stop for those looking for bargains even if for just a few hours when driving from France to Spain.

Andorra has some dazzling villages too. There are lots of shops and hotels and a large number of historical monuments, some dating as far back as Roman times. The Andorrans welcome visitors and are very good hosts. Tourists who visit Andorra tend to be either very sporty or those interested in nature.

Given the possibility of buying tax free goods, Andorra has a large number of shops catering for this. The most popular tax free goods are perfume, tabacco and electronic items...The road which joins Andorra la Vella and Escaldes, the two most important towns in Andorra, is lined with hundreds of shops. However, it is one of the least attractive areas in this small country.

Places to visit in Andorra