What to do and see in the Mérida?

Mérida is the capital city of the Autonomous region Extremadura, and is set in the Province of Badajoz.

One of the most important Roman capital cities at the height of Roman occupation of Spain, the city today has one of the best preserved collection of Roman monuments in Europe.

To get the most out of a visit to Mérida, wear a pair of comfortable walking shoes, light clothing, a hat (it gets very very hot in the Summer) and a bottle of water, go to the Tourist Information Office in the city center ((Av. José Alvarez Saez de Buruaga), and buy a plan of all the monuments and museums and set off on foot. The plan serves as an entrance ticket to all the main attractions.

See below a list of Merida's most important sights, monuments and remains.

Aqueduct de los Milagros: An engineering work of art which enabled Romans to transport water from the Proserpina reservoir. Construction was carried out in two stages, the first in 1 AD and the second in 3 AD. It is 830 metres long and 25 metres high. 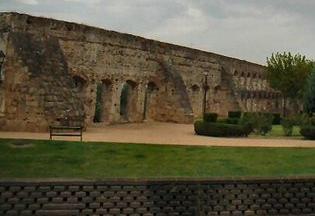 Alcazaba and Conventual: One of the charms of Mérida is how Arab and Roman remains blend together in a unique testimony to the city's history. This Arab fortress was built in 835 on the remains of a Roman dock.

Amphitheatre and Roman Theatre: Outstanding. The amphitheatre was built in 8 BC and had capacity for 14,000 people. The theatre, donated to Mérida by the Roman Emperor Agripa in 16 BC, had a capacity for 6,000 spectators. Each Summer a season of classical theatre is organised, although it is quite difficult to get tickets because of high demand.

Arco de Trajano: 15m high arch in the entrance to the main forum

Basilica Santa Eulalia: Declared national monument, this church supposedly contains the remains of the patron saint of Merida, St. Eulalia. Fascinating museum in the basement under the foundations of the church.

Roman house Mithraeo: Remains of a Roman villa, visitors can walk around the excavations, admire the mosaics and appreciate the extent and beauty of Roman villas.

Roman Circus: About a 20-minute walk from the Amphitheatre and Roman Theatre, the Roman circus is the only one of its kind in the whole of Spain. Probably built in 1 AD, with capacity for 30,000 spectators, it is one of the biggest built throughout the Roman Empire. Informative museuem just next to it.

Museo Nacional de Arte Romano: Excellent museum in a very modern interesting building in which the Roman remains under the foundations are included in the exhibits. Contains many of the objects found in excavations all over the city.

Roman bridges: The remains of two Roman bridges still stand today. The longest one crosses the River Guadiana, is 792m long and has 69 arches.

Santa María Cathedral: In the Plaza Mayor. Built in the 13th Century.

See: Guide to Badajoz for more travel information about the Province and places to visit near Mérida.