What to do and see in the Baeza?

Baeza is a beautiful historical town set in the province of Jaén in Andalucía surrounded by Europe's largest olive tree plantation and near to one of Spain's most impressive national parks, El Parque Nacional de Cazorla.

Baeza, was included in the UNESCO list of World Heritage sites last year. This ancient city dates back to the Moorish occupation in the 9th century, and to the Reconquista in the 13th century.

In the 16th century the city wasreformed according to the emerging Renaissance style. Architects started to incorporate new ideas from Italy into the urban design. The new emerging style, which later became characteristic of emerging Latin American colonial cities, can still be seen in Baeza.

What to Visit: Baeza, like many medieval Spanish cities, had a wall built all around, and the gates (Puertas) of Jaén, Úbeda and la Torre de los Aliatares are still standing today. El Palacio de Jabalquinto is a palace dating from the Sixteenth Century with a beautiful façade and indoor patio. The ancient University building and the Town Hall are also worth visiting, as is the Cathedral and the various churches ranging from 13th Century to 16th Century.


Where to stay: In Baeza itself there are several interesting and comfortable hotels. Confortel Baeza, built on the site of a sixteenth century convent and Hospedería Fuente Nueva used to be a prison for women. If you are a fan of paradors, there is a spectacular one in neighbouring Ubeda (also a UNESCO World Heritage site).

Surrounding area: The National Park of Cazorla is just over an hour's drive away from Baeza and offers visitors the chance to unwind and marvel at the scenery - mountains, green valleys, wild deer, wild boar, mountain goats, eagles, vultures, rabbits, foxes, squirrels...... The Parador of Cazorla, at 1,400 metres overlooks the surrounding the mountain range, which offers its guests peace and quiet, organized visits to different areas of this enormous park and good food. 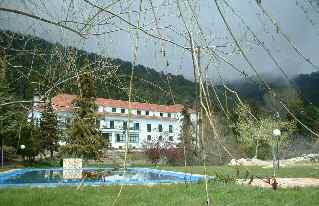