From 13 to 19 March, Valencia celebrates one of Spain's best known festivals: Las Fallas.

The Fallas are enormous models made out of papier mache, wood and wax, and often characaturing Spanish social and political current affairs. The models are burnt on the night of 19 March in a festival of fire, fireworks and organized mayhem. Fireworks and firecrackers play a big role in any fiestas held in this region, and Fallas is no exception. Be careful of firecrackers being thrown along the street by youngsters. And be prepared for the ground to shake with the force of the fireworks display which begins at midnight.

There are various theories concerning the origins of Fallas. Some claim that the festivals have been celebrated in Valencia since the Middle Ages when carpenters used to light a bonfire on 19th March, St Joseph Day. Joseph - José in Spanish - is the Patron Saint of Valencia, and St Joseph's Day is Fathers Day all over Spain. A second theory suggests that the tradition of lighting bonfires in honour of the saints arose from pagan customs which the Church accepted and adapted to its own interests, because their popularity made them impossible to ban. 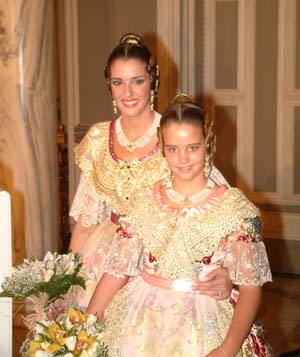 The Fallas are divided into seven important stages. The city is adorned in decorations and fallas, and public enthusiasm takes to the streets. During the week the following ceremonies take place: the nomination and proclamation of the Fallas Queens (whose role will last all year as they will be called on to form part of the dignatories invited to participate in local and regional events), the Exaltation, the Crida, the Cavalcade of the Ninot, the Offering of Flowers, the Planta and the Cremá.

The Crema is the culmination of the Fallas. For some it is the saddest moment, while for others it is the highest point of the festival. The Fallas are lit on the night of St. Joseph, 19th March. The last ones to be burnt are the fallas which have won prizes for the best ones (there are several categories under which fallas compete). One "ninot" is saved each year, from the flames by popular vote, and exhibited in the Museum of the Ninot. When at about midnight Valencia literally goes up in flames as more than three hundred fires are burnt throughout the city, the spectacle is as awesome as it is unforgettable.