The first web in Spain for foreing residents

The original town of Ubeda was established around 200 B.C. although its real interest lies in the amazing collection of renaissance buildings conserved in the historical centre of the city. The centre has been declared a World Heritage Site by UNESCO, and strolling around the old buildings, churches, palaces and plazas, is like walking around an enormous open-air musuem.

Much of Ubeda's splendour is thanks to the influence of Francisco de los Cobos, a resident who became Secretary for Emperor Charles V, as did his son after him. Because of their prominent post in the Spanish Court, they were both given riches for themselves and favours for their home city. As a result they brought back a lot of money and a lot of favors for Ubeda. The 16th Century aristocracy in Ubeda sought to immitate well-known Italian families, and turned to the architect Andrés de Vandelvira who was an expert in Humanistic and Renaissance architecture. Many of Ubeda's most impressive buildings were designed by Vandelvira.

The most monumental ensemble in Ubeda is the beautiful Plaza Vazquez de Molina, considered by experts to be Spain's best examples of Renaissance urban planning. Overlooking the Square is Ubeda's Parador, a 16th Century palace with an impressive interior patio.

Ubeda is just a 2 hour drive away from Granada, and about 45 minutes away from Jaén. The drive will take you through the largest olive groves in Europe. 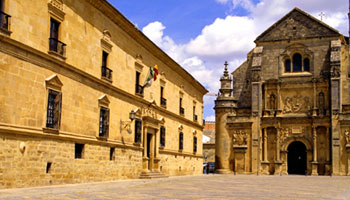