Political representatives of Madrid and Beijing signed an agreement yesterday in China to twin the two cities. The president of the Community of Madrid, Esperanza Aguirre, and the mayor of Beijing, Wang Qishan met with the Secretary of the Beijing Municipal Committee of the Communist Party of China, Liu Qi, before then signing the agreement.

According to China’s People’s Daily, Liu Qi told the press that “Beijing and Madrid are both well-known historical cities, which have the same task to promote economic development and urban construction”. Meanwhile the mayor of Beijing said that the two cities had had frequent exchanges and communications over the past few years and that this agreement would strengthen their friendly relationship.

Esperanza Aguirre, who is probably one of the most astute, ambitious and determined members of Spain’s popular party at the moment, said that Madrid hoped to strengthen cooperation with Beijing in such fields as economy and trade, tourism and cultural exchanges.

Her visit to China has been applauded by business circles who consider the Chinese market to be crucial over the next few years, and by promotors of Madrid’s bid to host the olympic games in 2012 who hope that her visit will raise awareness and that the twinning of the two capitals will boost Madrid’s image as an “international” city.

The main news stories in Spain yesterday and today center around the king and queen’s state visit to Morrocco. This is the Spanish royals’ first official visit to Morrocco since 1979, and it represents the will of both countries to improve relations which reached an all-time low during Aznar’s presidency. The Spanish king spoke at an official dinner yesterday evening and expressed his country’s gratitude to the Morroccan government for their cooperation with Spanish authorities in the fight against terrorism.

The issues of terrorism and illegal immigration are the two most important things on the agenda of Spain’s relations with the North African country. Yesterday king Mohamed VI pledged his support in both areas, and Miguel Angel Moratinos, Spain’s foreign minister who is accompanying the king and queen on their visit, announced that the Spanish Interior Minister would be visiting Morrocco soon to discuss ways of reducing the high numbers of illegal immigrants who try to get across the sea separating Spain from Africa in crowded boats in search of a better life in Europe. 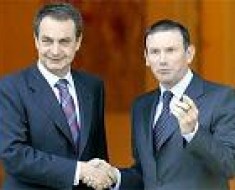