According to eyewitness reports a forest fire one kilometre away from a crowded beach in Ibiza (Cala Benirras) caused chaos amongst tourists enjoying a day in the sun. After hearing nearby cars exploding the beach goers were forced to huddle together near the shore.

Emergency plans were immediately put into action involving the fire service, helicopters, the police and the civil guard. Everybody had to be rescued by boat as the sea was the only escape route given that the fire had spread rapidly in the direction of the beach.

No injuries have been reported. 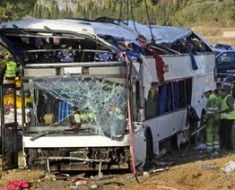