Jesús Raga has become the first tetraplegic mayor in Spain after taking up his position for the Valencian municipality, Bonrepòs i Mirambell following the death of its incumbent mayor, Vicenta Bosch. Raga who is thirty four years old was paralysed after suffering a neck injury in a traffic accident when he was fifteen years old.

The thirty four year old was given the post of deputy mayor in 2003 in the town hall of Bonrepòs i Mirambell which was then governed by Bosch (PSPV-PSOE). Raga says he is proud to have the support of all members of the town hall and can count on the help and support of his colleagues.

In statement to the press Raga said that he wants to continue projects which are already on the agenda such as improving the local football stadium, setting up a new health centre and finding a solution for dealing with the former military barracks situated in Bonrepòs i Mirambell.

Raga also wants to get more aid and subsidies for his municipality in order to improve and provide services.

Amongst his top priorities are getting more doctors, expanding the school, adapting the school playground and improving access to public transport. 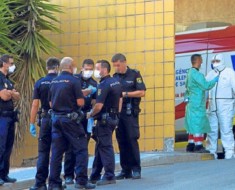