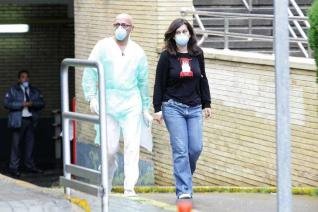 The Minister of Health and Social Policy, Trinidad Jiménez, confirmed the first case of Swine Fever in Spain in a press conference earlier today. The first case of this disease has been detected in a patient in Almansa (province of Albacete) who has been under observation in hospital since the weekend. Jiménez, who met this morning with the National Executive Committee for the Control and Prevention of the virus and is due to report to President Rodriguez Zapatero today, said that the situation in Spain was not an emergency and was under control.

According to declarations made to the Spanish media this morning by José Martínez Olmos, the General Secretary of the Health Ministry, Spain has ‘all the necessary means to act against a flu pandemic’ of this type.

However, the number of suspected cases is continually rising. Yesterday it was seven, whereas this morning, as well as the first case detected in Albacete there are another 19 suspected cases under observation. José Luis Rodríguez Zapatero and Trinidad Jiménez will analyze the evolution of the epidemic later today and a further announcement is expected after their meeting.

Catalonia currently has the most suspected cases of Swine Fever with a total of 10 suspected cases – 6 men and 4 women who are all under observation in various hospitals in Barcelona.

The rest of the cases officially under observation are spread out throughout Spain in Castilla-La Mancha (as well as the case detected in Almansa), Navarra, the Comunidad Valencia, Aragón, the Basque Country, Andalucía (2 cases) and Madrid.

Furthermore, according to the advisor on Health and Consumption for the Balearic Islands, Vicens Thomàs, 2 suspected cases of swine fever have been detected in Mallorca, both patients are in the Hospital de Son Dureta following their recent return from a trip to Mexico.

During the press conference this morning the Minister for Health announced the adoption of additional measures this weekend. One of these is the creation of a scientific committee to study the evolution of the epidemic. Furthermore, the government has also asked airline companies to tell passengers returning from countries at risk to collect the necessary medical information which will be made available at airports.

Medical teams in all airports will also be reinforced.

Jiménez insisted this morning that the Spanish Government has taken on board all the recommendations made by the World Health Organization (WHO) due to the number of daily flights between Mexico and Spain. This morning passengers on flights from Mexico arriving at Madrid and Barcelona airports were required to fill in special forms prior to leaving the plane.

The Minister of Health for Spain underlined this morning that Spain had actually gone further than the WHO in its recommendation not to travel to Mexico at the present time. She also said that travellers returning from Mexico should be especially vigilant of their health during a period of 10 days (the incubation period for the virus) and that if they had any of the recognized symptoms (fever, difficulty breathing or a cough) they should go to see their GP immediately to rule out any infection.

A representative for the Ministry of the Environment and Rural and Maritime Affairs who was present at the meeting with Jimenéz this morning said that no pig farms were affected in Spain.