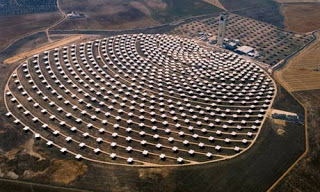 Ministry of Industry to reduce spending on solar energy

The Ministry of Industry has decided to cut spending on solar energy as part of the austerity measures designed to reduce Spain’s budget deficit. It has announced that it is planning to drastically reduce the large subsidies that solar energy producers receive. Subsidies will be cut by up to 45% for new solar photovoltaic energy plants and there will be cuts of up to 25% for large roof installations and cuts of up to 5% for smaller roof installations.

The cuts are part of the strategy currently under analysis by the National Energy Commission and the government both of whom are responsible for publishing independent reports which is why new laws regarding subsidies given to energy producers are not expected to come into effect until September.

The Minister of Industry, Miguel Sebastián, is in charge of bringing to a close the ongoing negotiations between the government and energy companies which began 10 months ago regarding cuts to the level of subsidy they are entitled to. At the beginning of July the Ministry of Industry closed a deal with energy producers to cut subsidies to wind power and thermal solar plants by 80 and 1000 million euros a year respectively.

4 million euros from the government.

The decision by the Ministry of Industry has coincided with delays to the so called energy pact a month after the unexpected appearance of Miguel Sebastián and the energy spokesperson for Spain’s main opposition party, the PP, Cristóbal Montoro in which they announced their intentions to reach a voluntary agreement on the future of energy production in Spain as soon as possible. However, apart from the freezing of the price of electricity in July, to the dismay of the large energy companies, nothing else has been achieved.

The future of renewable energy in Spain remains a controversial issue. Everything has been left until September from the type of energy to be used to assuring its administration until 2035 not to mention the cost of production.

The parliamentary commission created in May 2009 in charge of analyzing the national energy strategy for the next 25 years has been inconclusive. The modest advances by this commission have been insufficient in order to enable the government to make progress in its energy agreement and negotiations are due to continue in September.

All the companies involved in energy production are nervous about the outcome of these negotiations. Moreover electricity companies have gone to court over the freezing of electricity prices announced by the government in July and the Chairman of the Association of Photovoltaic Energy Companies, Juan Laso, has accused the government of ignoring proposals by his association to save up to 8000 million euros with significant sacrifices by companies in his association.