For the fourth time in ten months the government has been asked by Parliament to reduce the money it spends on highly paid posts by 25%. The call to reduce costs has come from the PP, backed by the PNV.

The PP has accused Zapatero of increasing highly paid posts paid for by the government by 20% something which, according to Rafael Merino who is leading the call for more austerity, makes it the most expensive democracy in Spanish history. Merino has also called for a ‘profound restructuring of government ministries’.

Since April 2009 three initiatives asking for more austerity and a reduction in the number of ministries have been approved by parliament – the most recent was proposed by the PNV and asked for there to be fourteen ministries instead of the current seventeen and two vice presidents instead of three.

The PP has accepted two amendments which ask the government to fulfil these rulings in favour of it modernizing, rationalizing and reducing costs by reducing the number of people it employs, the money its spends on advertising and avoiding duplicity in public services.

On the other hand it has rejected amendments put forward by PSOE.

Merino has justified the initiative proposed by his parliamentary group – supported by the CiU, PNV, ERC, BNG, CC and UPyD – saying that highly paid posts have increased from 374 in 2004 to 461 under the current government while at the same time unemployment has continued to rise and Spanish citizens are forced to make sacrifices. Merino defended his initiative saying that ‘the more ministries and highly paid posts there are in the government the worse things get in Spain and the more incompetence and lack of coordination there is’.

In the government’s defence the Socialist Member of Parliament, Meritxell Batet, attacked the opportunism of the PP and said that the crisis would not be overcome by ‘simplistic measures’.

Batet also pointed out that 77% of highly paid consultancy posts were held by civil servants and asked whether the PP wanted to make 25% of these unemployed. She also said that since PSOE took power it had reduced the number of consultants in each ministry and reduced the amount it spends on institutional publicity.

According to Batet the PP does not appear to be worried by the budget deficit but only in getting into power and criticised it for trying to create an institutional crisis in the middle of a recession. She also accused Mariano Rajoy’s party of ‘parliamentary pantomimes’. 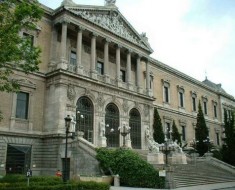