Obviously yesterday Spanish news was dominated by the election results. Jose Luis Rodriguez Zapatero was intereviewed for an hour first thing in the morning on the Cadena Ser (the only radio station who, last week, had invited Zapatero to talk about results the day after the elections) and also gave a long press conference later in the morning to a packed press room. He stressed the following points:

1. The Spanish political scene is going to change. His government will put the emphasis on dialogue, communication with all regional governments no matter which party is in power (one of the features of Aznar’s government has been the terrible relationship between central government and any non-PP regional governments) and will respect and be willing to listen to alternative political ideas. The PSOE government will, according to Zapatero, remove the arrogance associated with the PP party, and will invite as many people as possible to participate in the political process and in democracy.

2. In the fight against terrorism, Zapatero intends to involve all parties and to seek consensus in policies

3. If the United Nations is not in charge of the transition in Iraq by 30th June, the Spanish troops will be called back to Spain. This announcement has been picked up by most of the international press, and interpreted by some as giving in to terrorism. This is not the case, since Zapatero (together with 90 percent of Spaniards who disagreed with the reasons presented to them by Aznar for invading Iraq) has been against the Spanish alliance with the USA and UK ever since Aznar signed the agreement in Azores a year ago. Zapatero always argued that the arms inspectors should be given more time, and that the supposed threat of the existence of arms of mass destruction had to be demonstrated before invasion was justified.

He has always denounced Sadam Hussein, but has argued that violence can not be addressed by applying more violence, and has said that the allies policy in Iraq has been disasterous for world peace, for diplomacy and for the Iraq people. He has also repeatedly said that the invasion was an infringement of international law, and that for the transition in Iraq to reach any level of credibility, the United Nations (rather than the USA) needs to have the leading role. So he didn’t say anything new yesterday and his decision to withdraw Spanish troops if the UN hasn’t taken over control by 30th June should not be interpreted as reaction to the terrorist attacks last week.

4. Half of his government posts will be given to women.

According to the Catalan newspaper, La Vanguardia, “Spain is beginning a new era in the hands of a leader who is quiet and known for his willingness to discuss politics stubbornly and respectfully.

With his first words following the victory he championed quiet change … and promised to govern with humility“.

Meanwhile, the losing candidate and new leader of the Popular Party, Mariano Rajoy, appeared before the press yesterday flanked by Jose Maria Aznar (who has not yet spoken publically about the defeat since the night of the elections) and by other members of the PP Executive. He said that he was not going to resign and would lead the PP party in the opposition. Rajoy is considered to be much more open to dialogue than his predecessor, and his style is much less arrogant. So hopefully we will indeed see a new style of government in Spain. 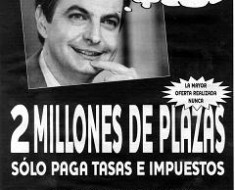