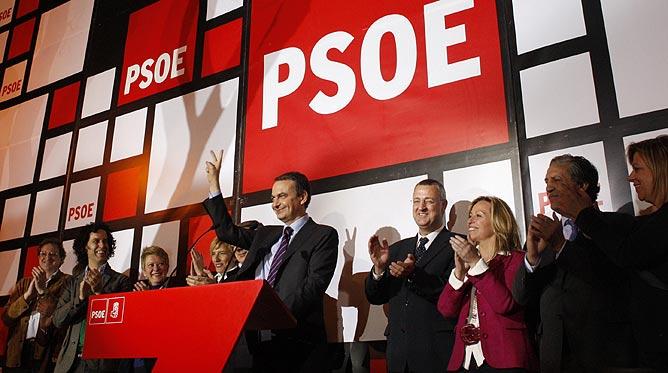 The Socialist party won the elections held yesterday in Spain by a narrow margin as predicted in the pre-election polls. Turnout was over 75 percent and both PSOE and PP improved their electoral performance with respect to the last elections in 2004 at the cost of the smaller and nationalist parties. The Socialists won 169 seats (compared to 164 in 2004) and the Popular Party won 153 seats (148 in 2004).

In his victory speech José Luis Rodriguez Zapatero paid tribute to Isiais Carrasco, murdered by ETA on the final day of the election campaign, and to all the victims of terrorism and their families.

The socialists did particularly well in the Basque Country and Cataluña where they took votes from the Basque PNV separatists and the left wing Catalan regionalists ERC who dropped from 8 to 3 seats.

The only small party to improve on their last result was the Catalan conservative CiU which won one seat more than in 2004.

The leftwing party Izquierda Unida had their worst ever result winning just 2 seats and their leader, Gaspar Llamazares announced his intention to resign last night.