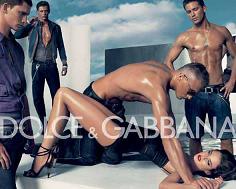 According to several Spanish organisations, including a department of the Spanish Women’s Institute (Observatorio de la Imagen del Instituto español de la Mujer) the advert encourages violence against women. Because of the controversy the advert has created here and the protest that has been registered in different areas of Spanish politics and society, the designers have decided to withdraw the advert, but only from Spain.

On announcing their decision, the designers Dolce and Gabbana accused Spain of being “in the dark ages”. They defended the advert by saying that the artistic photo had nothing to do with real life.

The advertisement in question shows a woman being held down by her wrists by a man with 4 other men watching. Various other Spanish organisations have complained about the advert and requested its withdrawal. Spain has one of the most worrying records of domestic violence in Europe, and despite the attempts of this government and previous PP governments to stem the growing tide of domestic abuse, the number of crimes committed by men against women continues to rise.

Dolce and Gabbana said that the advert was a work of art and that if the Spaniards were right in their interpretation of the photo, then both the Louvre and the works of Caravaggio would also have to be destroyed.

At present the advert is on display in an exhibition which opened yesterday in Milan showing other photos from their new advertising campaign.