Inhabitants in the Basque Country the richest in Spain

The Basque Country has overtaken Madrid as the area of Spain with the highest capita per inhabitant. Figures published yesterday by the Spanish National Institute of Statistics (INE) showed that GDP per inhabitant in Madrid was 29,965 euros compared to 30,599 for inhabitants in the Basque Country. Extremadura and Andalucía remained at the bottom of the list although figures show that the difference in GDP between parts of Spain is going down year by year. The average income per inhabitant in Spain is now estimated at 23,396 euros.

This is the first time that Madrid has lost its place at the top of the list since 1995 when the INE began to publish these figures although this change has been put down to more to changes in the Basque Country’s demography to its economic growth. In fact, the economy in the Basque Country has grown less than the national average over recent years.

However, the population has hardly grown at all. Since 1995 it has only grown by 2.3% while the population of Madrid has increased by a massive 21%.
Income per inhabitant has fallen in the Balearic islands. Figures for 1995 showed that income per inhabitant was equivalent to 120% that of the national average while now it is just 108%. However, the population in this part of Spain has also grown by 37% over the last 12 years. Furthermore, the incorporation of more workers in its economy has not led to economic growth. The Canary islands is also a similar case.

The figures just published for 2007 show that Catalonia has the highest GDP in Spain valued at 196,000 euros, followed by Madrid, Andalucía, Valencia and the Basque Country.

Aragón showed the biggest growth at 4.5% compared to an average growth in GDP of 3.8% for the rest of Spain. The INE showed that Aragón, Castilla-La Mancha and Galicia all had thriving economies with strong manufacturing sectors. Economic growth in Aragon was attributed mostly to building work in preparation for the Expo which starts in June.

Since 2000 average annual growth in Murcia has been the most intense at 3.9%, followed by Andalucía at 3,7%, Extremadura and Castilla-La Mancha (both at 3.6%). These four communities together with Galicia which has experienced renewed growth over the last 2 years are all at the bottom of the list in terms of income per inhabitant. However, it is also clear that regional differences are decreasing.

For example, GDP in Extremadura has gone from 64% of the national average to almost 69%.

Finally, figures published yesterday show that there are six regions in Spain with income per inhabitant above the EU average of 24,700 euros. 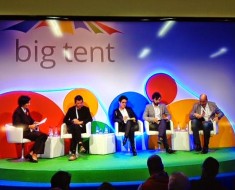