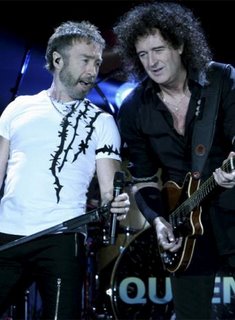 Rodgers and two members of Queen, Brian May and Roger Taylor first got together in 2004 when they toured under the name of Queen + Paul Rodgers. Now they are touring the world again presenting Queen’s latest album the Cosmos Rocks.

Last night’s concert started off with a ‘cosmic storm’ of sound and image. Queen performed songs from the new album but also old favourites like Hammer to fall, Tie your mother down, Another one bites the dust and I want to break free.

One of the most memorable moments of the concert was when Brian May took up his 12 stringed acoustic guitar and performed a beautiful version of Love of my life.

Later in a tribute to Freddie Mercury the large screen at the back of the stage showed pictures of Mercury while May played Bijou and Last horizon.

Radio Gaga, Crazy little thing called love and The show must go on, together with other new songs from Cosmos rocks and All right now by Free contributed to making last nights concert a memorable evening which ended with the undisputable classics Bohemian Rhapsody and We are the champions.

Queen are scheduled to perform two more concerts in Spain one in Murcia 24th on October and the other in Madrid on 25th October.