Today Princess Anne arrives to Gibraltar on an official visit and the Spanish press and government have greeted the news with surprise and indignation. Government officials call the visit “inopportune” because it coincides with the celebrations of Gibraltar’s 300 year anniversary of British rule (the Spanish press and politicians call it British occupation rather than rule).

The Spanish government is so annoyed at the visit and the celebrations, that apparantly on Saturday the Secretary of State for Foreign Affairs, Bernardino León, summoned the British ambassador to Spain, Stephen Wright, to his office so that he could convey in person the Government’s “anger and disappointment” at the Tercentenary Celebrations and the official visit of Princess Anne. According to León, “although the British government claims that this official visit bears no relation to the Tercentenary of British occupation of Gibraltar, it is obvious that one does bear a relation to the other, because of the timing of the visit”.

Security has been tightened for the visit, and although today’s programme has been announced, officials are not giving any information about events programmed for tomorrow and Wednesday. A spokesman for the Gibraltar authorities has said that for security reasons, the programme will be revealed on a daily basis.

Finally, according to El Mundo, Spanish President Rodgriguez Zapatero and US President Bush had a seven-minute (!!) meeting yesterday evening just before the official dinner held for world leaders at the NATO summit in Turkey. It is the first time both presidents have met, and the first time they have spoken since Zapatero ordered the withdrawel of Spanish troops from Iraq. 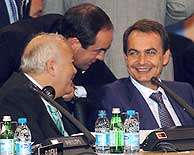