This weekend President José Luis Rodriguez Zapatero announced that in June he intends to inform Parliament of the beginning of talks with Basque terrorist group ETA.

Speaking in a Socialist party rally in the Basque country, Zapatero reminded those present that when ETA announced the ceasefire in Spain a few weeks ago, he said then that the government needed to verify the ceasefire before they could properly initate any peace process. Since then the reports commissioned by the government as well as messages sent out from Basque separatists seem to have persuaded the Spanish President that the ceasefire is real and it is time to start talks with ETA. He will seek the approval of Congress to start negotiating in June.

The announcement was received positively by all Spanish political parties yesterday except for the Popular Party whose vice-president, Angel Acebes, criticised the government for sitting down to negotiate with ETA before the group had been completely disarmed and dissolved.

The Association of Victims of Terrorism also criticised the news and announced a protest march in Madrid in June. However representatives of all the other political parties expressed their satisfaction at what they hoped was the first step on the way to a lasting peace in the Basque country.

Presumably in an attempt to appease the more critical factions of the Association of Victims of Terrorism, after announcing the start of talks yesterday, Zapatero said he planned to propose a the insertion of a clause honouring the memory of the victims of terrorism in the the introduction of the Spanish Constitution.

Zapatero also underlined his will to include all political parties in the talks. “Peace and tolerance have to be the fruit of a joint effort. Nobody should try to get ahead of anyone else” . 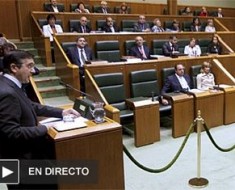