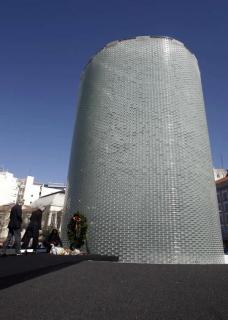 Yesterday the king and queen of Spain, accompanied by the Prince and Princess of Asturias, attended the ceremony to commemorate the 11th March 2004 bombings in Madrid. They honoured the dead by placing a wreath made of laurel at the foot of a monument dedicated to the victims, located in front of the Atocha station in Madrid.

Both the president, José Luis Rodríguez Zapatero and the PP leader of the opposition party, Mariano Rajoy, both attended the ceremony. According to reports there was a very cold atmosphere between the two. The ceremony took place just one day following a large demonstration in Madrid organised by Rajoy in protest against the government’s decision to allow the ETA prisoner De Juana Chaos to be placed under house arrest.

Other officials who attended were the Vice-President, Pedro Solbes, along with the Minister for Foreign Affairs, the President of the Comunidad de Madrid and the mayor of Madrid Alberto Ruiz-Gallardón.

The ceremony commemorated the third anniversary of the bombings in which 191 people were killed. There were no speeches but there was a moving performance of ‘El Canto de los Pájaros’, by Pau Casals played on the cello.

Around 1500 victims injured in the attacks and family members of victims who were killed filed past the monument following the official acts. The atmosphere was very sombre apart from a slight commotion when family members of victims who were killed in the attack unveiled a banner demanding that the former home secretary Ángel Acebes and the president of the government led by the PP when the attacks took place, José María Aznar be criminally charged.

The monument which is said to be the largest glass sculpture in the world is 11 metres high. It was designed by the architect Esaú Acosta. Weighing 160 tonnes, the glass which has been used for the monument is totally transparent. Inside it is sound proofed so that silence and light are the main elements.