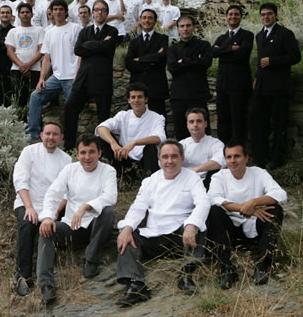 Ferran Adrià, one of the most famous chefs in the world of high cuisine today and well known for his use of revolutionary techniques has spoken about how he believes that top Spanish restaurants should confront the global financial crisis.

When asked in an interview with the leading Spanish daily newspaper, El Mundo, whether he agreed with the idea of reducing prices or creating more economic set menus he said that restaurants were free to do what they liked. However, in reply to the question about whether this may lead consumers to think that profit margins must have been previously too high he said that in fact the opposite was the case and that some restaurant ran into deficit which is why many top chefs ran parallel businesses.

He also said that high cuisine should try to rid itself of pretentiousness and that there was certain snobbery associated with eating in top Spanish restaurants. He said that he was in favour of creating a more informal image of eating in such establishments.

He said that while he and other top class chefs were trying to create a careful image of high cuisine in Spain some restaurants had got it wrong. He said that while not many people would be prepared to pay 300 euros to eat in a top restaurant they would pay that price for a ticket to see their favourite team play football. He said that it was a price many people could afford, even if it was only a once-in-a-lifetime experience.

Ferran Adrià, said that there were hundreds of different kinds and marvellous produce and ingredients waiting to be rediscovered around the world and that he was looking into products from the Amazon and would shortly be participating in a conference on Spanish cuisine in Brazil with Brazilian top chef, Alex Atala and Spanish chef Arzak. He said that he has wanted to travel to the Amazon region for many years to discover new things and products.

When asked whether he was more of a scientist than an artist he replied that he was a chef. He said that high cuisine in Spain was like haute couture something that very few people would wear or own but which constituted the motor of this sector. He also added that there were many things that were used at home today that had their roots in high cuisine.

In reply to the question over his business interests Ferran Adrià said that he was intending to return to being a chef first and foremost.

When asked about the controversy surrounding the chef Santi Santamaria he refused to comment.
Finally Ferran Adrià said that eating well nourished the soul. His restaurant has been classified as the best in the world for the third year in a row.