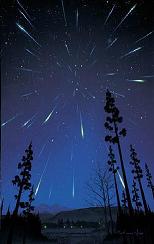 This evening people in Spain should be able to witness a host of falling stars shooting across the night sky.

Infact a falling or shooting star is not really a star at all. When meteoroids enter into the Earth’s atmosphere they burn up. The burning tail produces the falling star effect that we see lighting up the night sky.

The Perseid meteor shower occurs around this time of year when the Earth and Comet Swift-Tuttle cross, and the rate at which the meteors fall depends on where Comet Swift-Tuttle is in relation to the Earth. Apparantly, the comet has a ring of debris in its orbit, and when this debris enter’s Earth’s atmosphere, the meteor shower starts. The nearer the Comet is to Earth, the greater the intensity of the shower and number of falling stars.

According to the Instituto de Astrofísica de Canarias, the best time to look for the shower tonight is in the early hours of the morning, between midnight and five a.m., when the Perseo constellation is at the highest point of the horizon. The Canary Astrophysics Institute advises us to observe the phenomenon from an open space (beach, terrace, field….) as far away as possible from town lights. We are advised to look towards the horizon and not use telescopes, because the wider the field of vision the better.

Apparantly this year the shower’s intenstity will be greater than last year, so get your wishes ready!!