Cost of mortgages registers biggest fall in a decade

It is becoming increasingly difficult to secure a new mortgage in Spain with Spanish banks reluctant to commit to loans in general. However, those that already have a loan or mortgage are seeing the amount they need to pay go down – something which has not occurred for a decade. Those people that need to review the amount of their monthly mortgage payment are seeing reductions in the region of 182 euros.

The Euríbor, which is the official interest rate in the Eurozone, is now at a historic low similar to 6 years ago when it was below 2%. The Euríbor will close in February at 2.135% when only a year ago it was 4.349%.

The fall in the Euribor is the biggest annual fall since the beginning of 1999 when the euro was introduced and the Euribor was created.

If the Mibor , the official interest rate before the Euribor, is taken into consideration such a dramatic fall has not occurred since 1997.

The savings that an average mortgage payer will make will increase the longer the mortgage terms are. For example a family who revises a 150,000 euro mortgage this month to be paid over 25 years will save 181 euros a month which is 2,172 euros a year.

However some mortgage payers will be able to save even more. For example a 50 year mortgage will now be 32% cheaper than before. The fall in the Euribor is one escape route for families and businesses during the economic crisis which Spain is currently experiencing.

Following much resistance the European Central Bank has decided to relax its monetary policy. Urged on by economic recession and low inflation it has dropped interest rates from 4.

25% to 2% over the space of 2 years. Over the last five months the Euribor has only gone up slightly once. Moreover, economists predict that Jean-Claude Trichet will cut interest rates even further to 1.5% or even 1%.

Coupled with these discouraging figures for mortgage lending and the fall in the price of property in Spain, which according to some experts will fall by a further 20% this year, Spanish architects conceded 58% less building licenses for new construction projects in 2008.

In addition, 13 of Spain’s largest construction companies did not start any new building projects in December last year. 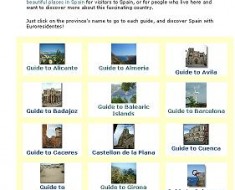