Valencia’s most popular local newspaper, El Levante, dedicates one of its headlines this morning to a news item published by the Sunday Telegraph yesterday about the protest of foreign homeowners in tourist areas of the Valencian region who are being forced to sell “surplus” land at a fraction of its market value because of land laws which have already been declared as “unjust” by the European Parliament but which the Valencian Government has failed to modify.

In an unprecedented joint action, 17 EU ambassadors have written to the Spanish President asking him to intervene to prevent the Valencian government from expropiating homes or from demanding financial payment from homeowners on the Costa Blanca.

Ten years ago a law was passed by the Valencian government to prevent landowners from obstructing building development. According to the Telegraph, the law “is being exploited by construction companies, with the backing of corrupt local politicians.

In one town after another, they have been granted the right to seize land around foreign-owned homes, pay paltry sums in compensation and demand cash from the sellers to pay for new roads, drainage and other services“.

The Valencian government has refused to respond to complaints made by the European residents about the law, and according to the British Ambassador in Spain, the Valencian authorities rebuffed EU ambassadors two years ago. Earlier this year homeowners took their case to the European Parliament which issued a report condemning the law and criticising apparant corruption among developers, officials and lawyers. But the Valencian government did nothing to stop the practise. Protesters and EU ambassadors in Spain say that unless the Spanish central government intervenes, they will take their case to the European Courts of Human Rights.

The ambassadors warn of negative consequences on the reputation of Spain in general and of Valencia in particular, as a risk-free place to invest in property.

President Zapatero’s office have issued a statement saying that he has “taken note” of the letter, and Spain’s foreign minister Miguel Angel Moratinos, has said he will approach the Valencian government to help ensure that the rights of property owners were fully protected.

According to one of the affected residents, Charles Zvoboda, a former director of Canada’s intelligence service, the Valencia government is using the law as light relief for its massive debts. Property agencies consulted by the Telegraph say that law has already made the property market in the area vulnerable and less foreign buyers are prepared to risk buying land in the Valencian Region. 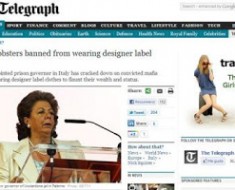