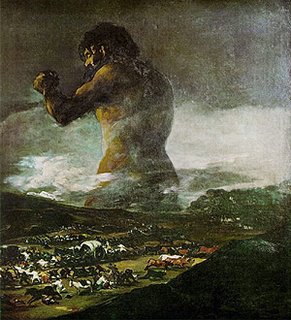 Yesterday the Prado Museum in Madrid published a report on its investigations into whether El coloso was really painted by Goya himself or a follower of the artist. The first important conclusion contained in the report documents and verifies that the painting came into the hands of the Prado Museum when it was given to the museum by the family of Fernández Durán – through a donation made by the Duchess of Perales in 1931. This point of verification rules out that it is a later falsification of the painting.

The second conclusion made in the report is that specialists at the Prado Museum suspect that the initials A.J. found at one corner of the painting following its restoration represent Asensio Juliá, a close follower of Goya.

The third conclusion comes from the analysis of the painting itself which has been the subject of an exhaustive investigation is that the painting was made during the first part of the 19th century. They also believe that the artist was not Goya due to some aspects of the painting such as the way the landscape is painted or the crowd or the figure that fills the horizon together with many other details which do not fit with what they believe to be genuinely Goyesco.

Although all the details listed above appear rather technical to a non-expert eye the painting in question it is almost certainly not a falsification due to the fact that it was painted during the first part of the 19th century because Goya did not become a popular sought after artist until half a century later.

The process of investigating the origins and authenticity of El coloso has taken a long time and only came about due to the popularity of the artist and the number of temporary exhibitions of his work. With temporary exhibitions museums must check the condition of paintings and take charge of their conservation. This means that paintings are not only checked for the fragility of their visible surface but are also subject to radiological checks in order to see what is behind the surface.

When anything unusual appears a lengthy process of investigation begins. In the case of El coloso, believed to be by an important artist such as Goya, doubts cannot be aired until their is some solid evidence or conviction that the painting is not by the said artist. What appears to be clear is that El coloso is Goyesco and was made during the first part of the 19th century by a follower of Goya’s style.