Catalan political parties have asked Álvaro Múnera known as ‘El Pilarico’, an ex bullfighter from Colombia who is now against bullfighting to appear in the Catalan parliament to put forward the argument against it. He is expected to appear alongside almost thirty other people who will take part in the debate over bullfighting during the course of next month

The deadline for presenting candidates who will participate in the debate over bullfighting is 25th January. It is believed that a total of thirty names will be presented which will be evenly split between those speaking in favour of bull fighting and those against it.

Another name that had been put forward by the pro bullfighting lobby is Serafín Marín, although there is some doubt over his appearance.

The president of Ciudadanos-Partido de la Ciudadanía (C’s), Albert Rivera, said that Marín had made a personal commitment to accept the invitation to appear before the Catalan parliament to give his point of view. Rivera also explained that he preferred Marín over Esplà or Joselito, because he was a Catalan bullfighter.

The anti bullfighting lobby has revealed that the philosopher, Josep Maria Terricabras, and that ex Vice Chancellor of the Universidad Autonóma de Barcelona, Lluís Ferrer and a member of the European Green Party would be amongst their candidates. 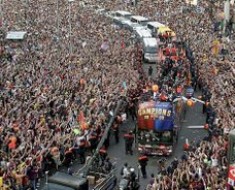