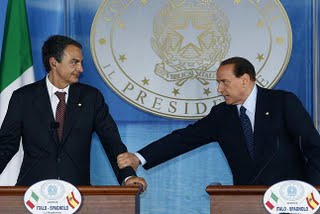 Berlusconi raised a few eyebrows during a press conference held during the Italian-Spanish summit yesterday. Apart from assuring the press that he was the best President Italy had ever had, he also categorically denied all allegations against him which accuse him of paying a prostitute for sex. He made the extraordinary statements during a press conference which marked the end of the 16th bilateral summit meeting between Spain and Italy on the Italian island of Maddalena at which the Spanish president, José Luis Rodriguez Zapatero, was present, and probably squirming, as the press conference turned into debate about the Italian premier’s lifestyle and habits as Berlusconi spoke at length about the scandals surrounding him.

When asked about his relationship with prostitutes, Berslusconi spoke yesterday at leisure about the parties he held in which young women were invited, claiming that as far as he was concerned the women were friends of one of his guests. He even suggested that his critics were probably just jealous.

Berlusconi also spoke emphatically about the allegations that he paid women for sex. He told reporters (and the world) that for him the best part of being with a woman was the “conquest” and so there would be no pleasure for him if he was reduced to paying for sex because there would be no conquest involved.

Berlusconi said that he regretted that the media had published declarations made by himself which he says he never made, and said that reality was very different from that described in the newspapers.

Berlusconi also dismissed the reports of a conflict between him and the Italian church and rejected the suggestion that his image was not really suitable for the post of president of a nation. He said as far as he was concerned he was the best president the Italian Republic had ever had and that Italy’s image was intact and that visitors continued to flock to his country.