Three years on, 29 suspects go on trial today accused of perpetrating the 11th March 2004 terrorist attack in which 191 people were killed and hundreds more injured. The first defendant called to testify, Rabei Osman, ‘Mohamed El Egipcio’, is accused of being the intellectual author of the terrorist attack, has refused to answer any of the questions posed to him by the court and by his own lawyer. This may turn out to be a tactic used by other suspects during a trial which is the main news story Spain today.

The judges in the case, Javier Gómez Bermúdez, Fernando García Nicolás and Alfonso Guevara will have to establish the facts and decide whether or not the 29 defendants played a part in the planning of the attack, aswell as the actual bombings, what that part was and what sentences they should receive if found guilty.

Seven of the 29 defendants, who are also accused of drug trafficking crimes as well as 191 murders and 1,824 attempted murders in the terrorist attack, could face up to 38,656 years – this would be the longest prison sentence in Spanish history. 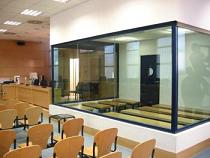 The trial is taking place in this special court room in the High Court in Madrid. The defendants are seated in the separate area with large glass windows and will be called up one by one to testify. 270 police are present at the trial. Sessions will be attended by 150 11th March victims and families of victims and 400 journalists – images of proceedings are being projected in real time in a separate room.

No politicians will attend the trial.

On the morning of March 11th 2004 a group of 12 terrorists (3 of the defendants present today are suspected of being members of this group) placed 13 bags containing bombs on commuter trains leaving Alcalá de Henares travelling to Madrid. The explosives used were reinforced with shrapnel which it is believed was obtained from Asturias from an ex-miner.

All investigations carried out by the police and the judiciary have ruled out any connection with the terrorist organisation ETA. This has not stopped the opposition party PP from reiterating claims, without proof, that the attacks were linked in some way to ETA. PP supporters and PP-friendly sections of the Spanish media back these claims.