We lived here for nine years in the 1970’s. Situated in the West Midlands and once a steel city on the edge of the ‘Black Country’ (see the posting about Birmingham), it was then a town that had become nationally notorious because of its maverick Tory M.P., Enoch Powell. There had been an influx of new people from the Punjab in India and from a single parish in Jamaica.

Unprepared for this, there were soon immense tensions between the indigenous population with its strong family base, and people of ethnic culture, all of it aggravated by Powell who forecast the destruction of what for him was Britishness. In our time we were aware that some people were sorry for us that we lived in such a place. We became sorry for them, that they were unable to imagine the pleasure and enjoyment we had in living in a vibrant multi-ethnic community, to which, now thirty years old and one of the first of its kind, the Wolverhampton Inter-Faith Group has made an important contribution.

Over the years Wolverhampton has become a diverse and lively city which has learned to live with and celebrate its changed identity.

We had very happy years there amongst a naturally friendly, warm and good humoured people.

Like many other cities, it is made up of a collection of neighbourhoods which over the years have coalesced into a single population of a quarter of a million, although each retains its individuality . There are fine parks, a splendid Victorian theatre, a Concert Hall, plain in design but with a perfect acoustic, a famous football club, a University and all the usual amenities and distinction of a large town, to the extent of even having its own Anglican Bishop! Just now there is an Italian food market in the main square. It gained city status in 1985, one of the youngest we shall meet in this series.

To the west of the city there are the beauties of the Shropshire countryside.

The Long Mynd, or ‘Long Mountain’, is a ridge of high ground in South Shropshire, running roughly SW to NE, and extending 15 km in length, between the Stiperstonesto the west, and Wenlock Edge to the east, and there are many fine walks in the area. Most of the Long Mynd was bought by the National Trust in 1965, and it features in the poetry of A.E. Houseman and the novels of Mary Webb, notably ‘Gone to Earth’. 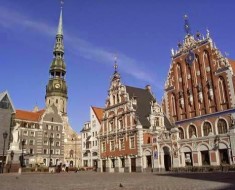