To get lost in the same city in a period of only three days is some achievement and that’s how it was on my brief visit to this wonderful city in March 1994. The first was the worst. I had been traveling by overnight train from Budapest, had found the Ciarus International Centre, the excellent hostel where I was to stay, went out to get some of my clothes cleaned, and then got totally lost. A violent hail storm added to my confusion and as I looked around helplessly, taking refuge in a bank, people took pity on me and helped me to find my way back to base.

That unfortunate beginning was very soon forgotten (until I got lost the second time). A city with a long tradition of independence and humanist scholarship, Strasburg embraced the religious teachings of Martin Luther at a very early stage, his adherents establishing one of the first Protestant universities. When completed in 1439 Strasburg’s Cathedral built in a lovely plum coloured stone, was the world’s tallest building.

I was overwhelmed by it. A great sense of space and light, it has none of the medieval menace of some of Europe’s famous cathedrals. Next door there is a splendid museum with many artifacts and relics associated with the Cathedral. I also visited St.Thomas’ Church which traces its history back to the 6th. Century when a group of Scottish monks (Celts?) worshipped there, the present church being built in 1280. The Reformer Martin Bucer was minister from 1524 to 1540, and it has been a protestant church ever since. I found it an open and restful place.

In 1949 the city was chosen to be the site of the Council of Europe, and since 1979, Strasbourg has been a seat of the European Parliament, although sessions are held there for only four days each month. The French demand it, although everyone else agrees that there is no logic or economic sense in the arrangement, with other business being conducted in Brussels.

I was able to meet the Anglican Chaplain to the Assembly. I asked him why he was so committed to Europe. ‘The day of the nation state is finished’, he said. ‘But the days of flags and national anthems are not. Gradually the old loyalties are weakening’. That was twelve years ago. And a lot has happened since. I believe the principle remains true but the problems of European unity become more and more complex. Urgent, as well.

I would exchange many pleasures for another visit to Strasburg. For me, it is a wonderful city, full of historical challenge and political relevance. And irony too, perhaps, for here Claude Joseph Rouget de Lisle composed “La Marseillaise” in 1792. Strasbourg’s status as a free city however, was later revoked by the French Revolution, the leaders of which had made his song their anthem of freedom! 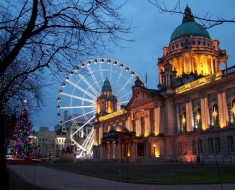