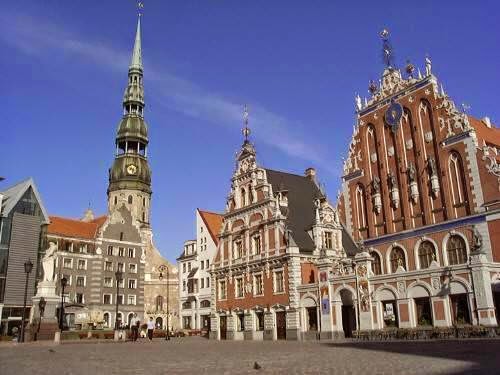 The capital of Latvia is also the site of the international airport which links the three Baltic countries . At the begining of our tour we had flown here from Gatwick and then caught a propeller powered plane to Tallinn, but our day long journey back from Tallinn to Riga was by coach through wonderful wooded country with occasional glimpses of houses made of stone and wood. In the early evening our excellent guide, Riina, gave us a preliminany tour of the city which is a UNESCO World Heritage site and we were impressed by the fine buildings and green open spaces which characterise it.

With good reason it is nick named ‘the green city’. There are nearly 700,000 citizens, more than a third of the total population of the country and this year the city shares with Umea (Sweden) the distinction of being the European capital of culture.

We joined the train of tourists next morning led by Peter, a local farmer, bee keeper and a recent owner of a railway station. A great character, he brought the city to historical and present life for us. Bishop Albert and German merchants founded the city in 1201 and through the years it has had a similar experience of repeated occupations to Estonia . The old town was superbly restored for its 800th anniversary in 2011. ‘Freedom Street’ is the main thoroughfare with fascinating Art Nouveau architecture, claimed as the best in Europe.

In June 1940 the Soviet Union invaded Riga and was made it the capital of the ‘Latvian Soviet Socialist Republic’, and thousands of Latvians were executed or deported to Russia. But then in 1941 Germany occupied the country lasting until 1944. In both cases young men over 16 years of age were forced into the armies of the invading nations, so that often brothers were fighting brothers. On one day in November 1941 and then on another the following month the appalling massacre of 25,OOO Jews took place near to Riga, their bodies piled high in pits designed for that purpose. We wondered how people could forget such a legacy, let alone forgive it, but we were impressed by a sense of purpose in a city at last relishing its freedom. Today about 40% of the population is of Russian origin and 43% Latvian.

I went into the Orthadox Cathedral and found it impressive but a little overwhelming; a beautiful building but it’s many pictures of sacred notables filling every conceivable space made me feel excluded from a religious tradition that otherwise I respect.

In contrast we had a delightful boat trip on a canal that joins the river Daugava which opens up into the busy Gulf of Riga and our boat passed by cruisers we had seen inTallin.

We would lke to come here again.