The rise of the city is indistinguishable from the history of civilisation. Whereas families and then groups of families were primarily into survival, often with shared hunting grounds and religious cults, life in the great cities became more structured and controlled. There people began to develop language and writing, learned to draw, sing, learn, buy and sell, to call upon their gods and relate to each other commercially and within the rule of law.

Lewis Mumford in his magisterial if idiosyncratic book ‘The City in History’ (1961), sees the beginnings of urban life in the formation of the earliest villages as long as 15.000years ago. ‘The modern city itself, for all its steel and glass, is still essentially an earth-bound Stone Age structure’, he says, and points out that the granary, the bank, the arsenal, the library, the store, the canal, the drain, the sewer, citadels and sacred sites all pre-dated the city, and continued in numerous manifestations as the importance of the city grew.

The ancient folk ways were maintained and survived the development of the bigger, richer and more powerful urban life. However, the transition from a small open society to an amorphous walled community, says Mumford, meant that ‘new ways, rigorous, efficient, often harsh, even sadistic took the place of ancient customs and comfortable easy-paced routine’.

Monarchy was at the heart of the primitive city, says Mumford, supported by the priestly caste, the two sometimes invested in the same person and family. He argues that it was the hunter chieftain and his growing influence on the village which was the catalyst that turned small scattered communities into more complicated ones protected within the citywall. ‘Under pressure of one master institution, a multitude of diverse social particles, long separated, if not mutually antagonistic, were brought together in a concentrated urban area’.

The genesis of the city of course was in the east not the west. It is possible to date its formation as a social unit around 5,000 years ago. We know about the great urban landmarks of Ur, Nippur, Uruk,Thebes, Heliopolis, Assur, Nineveh, Babylon but their origins are shrouded in mystery. All of them however were in a restricted geographical area, dependent for irrigation and trade on the draining of the swamps and the control of great rivers.

We shall be thinking in this blog of some of the cities of Europe, but those early cities of Mesopotamia, Greece and Egypt, the customs of their societies, the store of knowledge in their libraries, the planning of their streets and open spaces, the pre-eminence of their religious sites were all prototypes of the cities we know today and which we will now begin to visit. 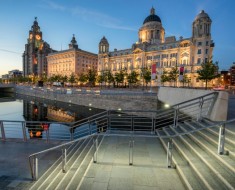