At last another city! We spent five days here at the beginning of May, arriving at the end of a lightning storm and leaving on a warm sunny day We stayed in the medieval part of the city – once the seat of Polish kings – still with some of its old city walls built for its protection, the moat which surrounded them now the site of a delightful park ringing the old pear shaped city. 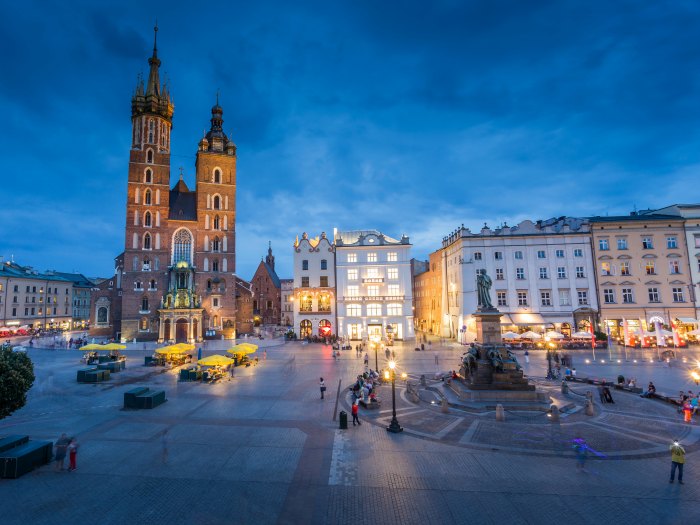 Krakow is a favourite venue for city breaks because of its accessibility. It is said that it has become the stag party centre of Europe, a claim we were not in a position to authenticate. Nor wished to!

Krakow is a tourist trap. Even at this early time of the season, it was very busy with masses of visitors and crocodiles of children, many of them Polish.

We wondered if as well as them having a holiday, this was an educational exercise in honouring their inheritance, for Poland, after its tumultuous history has only been an independent state in the last 20 years. Beggars abounded – some elderly and wearing national dress, others trying to do something to attract attention. One man we saw more than once half lying on the ground doing clever things with a football, moving it from head to feet to chest. We saw two little boys who couldn’t have been more than eight years old with a small dog at their side and pretending to play a piano accordion – one either side of the road.

We climbed the 12th century tower which was once the town hall in the huge market square, but itself dwarfed by the vast two tower St.

Mary’s Basilica, to us more impressive outside than inside. In the 12th Century a trumpeter warned the city of a Turk invasion from the highest of the towers, but was shot by an invader’s arrow half way through his warning call. So – and you can’t get more touristy than this –to commemorate the event a trumpeter appears at one of four windows high in the tallest of the towers to replay the occasion, – though without the arrow -and repeats this at the other three windows. A ritual that continues every hour, night and day.

The old city is an A to Z of architectural styles – gothic, renaissance, baroque etc., There are more than 30 museums; we managed eight: the National, and two Jewish museums in the old Jewish quarter and one devoted to the artist, poet, dramatist and theatre producer Stanisklaw Wyspianski being the most memorable.

He was part of the New Poland art movement (comparable to the Rennie Mackintosh era and at the same time). One astonishing aspect of his work was his decoration of the whole of a huge gothic Church with patterned and floral paintings on the bare stone and ceiling, and some stunning stained glass windows, hardly done justice by the gloomy religiosity of the building. We saw a lot of his portraits and some endearing ones of his own sleeping children. Sadly he died before he was forty. He is virtually unknown beyond Poland it seems.

A fascinating place to visit, excellent food at good prices, courteous and quietly friendly local people, impressive buildings, lots of history and a good introduction to a much abused but brave nation.