The capital of Finland and with a population of more than half a million, Helsinki carries the narrative and some of the wounds of its country’s short history. Ruled by Sweden for several hundred years and then dominated by mostly benign Russian control, Finland has somehow maintained its distinctive character and appeal. Tsarist rule came to an end in 1917, and Finland declared its independence on 6 December of that year.

The city has some fine buildings, many of then built comparatively recently with a strong influence of Art Nouveau. There are two cathedrals – the amazing red brick Orthodox with its enormous round pillars and the immense and elegant white Lutheran one, approached by wide steps. The Finlandia Concert Hall was designed by Alvar Aalto. He used Carrara marble on the exterior as well as inside the building. He viewed marble as an important link with Mediterranean culture, which he wanted to bring to Finland (why I wonder?). Finland’s climate however caused the marble to warp and break, and the building has had to be resurfaced.

Proof of the advantage of using indigenous materials!

Music is very important in Finland where its great composer Sibelius is honoured in all sorts of ways. On a visit earlier this year we visited his memorial which consists of irregular craggy structures like a collection of fir trees, with a bust of the composer to one side. It’s an impressive work of sculpture in steel by Eila Hiltunen, opened in 1967. Apparently at first it aroused criticism for its radical departure from the conventional type of memorial, and by way of compromise the sculptor added the huge bust of the youthful composer. Set in a wooded park on a hill outside the city and – when we saw it was on a clouded day in freezing temperatures – it makes an unforgettable impression. There is a fine modern Opera House (see Euroresidentes Classical Music blog 19.

02.06) and splendid museums and art galleries

The city is on the Baltic coast and there is a fascinating fort on a group of small offshore islands which we visited, the ferry crashing through the broken ice. Originally built in 1748, when Finland was part of Sweden, Suomenlinna (‘Castle of Finland’) was used to defend the country from various invaders, including unfortunately the British. It is still a military centre but also the home of several hundred residents. Now a World Heritage site it is presently celebrating its 250th anniversary. We found it a rather forbidding place and were glad to return to the more peaceful broad streets of the city and to the little gem of a hotel, ‘The Linna’, which we would warmly recommend. 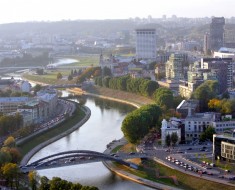