Can a city long in ruins, situated more in Asia than in Europe, find a place amongst these glimpses of contemporary European cities? Probably not, but never mind. 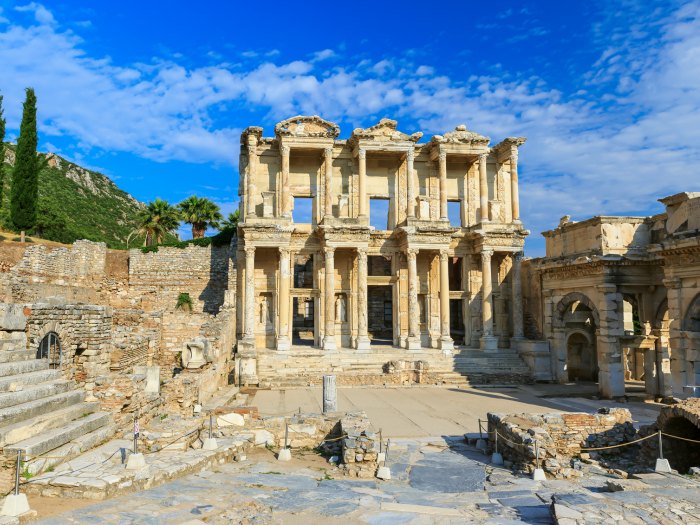 Last month we visited this amazing ancient site close to the modern town of Selçuk, as part of our brief tour of western Turkey, and although mostly now in ruins, its size and importance in world history makes any visit an impressive experience.

Once a major port on the Aegean Sea, we walked its wide road which once led right down to the coast. On either side houses are currently being excavated. Everywhere there are significant reminders of the city’s past glories as one of the great Greek cities of Asia Minor, some would say the greatest.

Its later importance during the Roman period of governance was second only to Rome. With a population of a quarter of a million in the 1st century A.D., it was the second largest city in the world.

Completed around 550 B.C., the Temple of Artemis was one of the seven wonders of the ancient world. A single column is all that remains now of its marbled magnificence, after its destruction by a mob energised by the St.John Chrysostom, Archbishop of Ephesus. The Greek Artemis was a goddess of virginity, women’s concerns, the hunt and the underworld; a fairly comprehensive list. There are two huge and extraordinary and well preserved statues of the goddess in the excellent Ephesus Museum, with many decorative protuberances on her body and person, the significance of which is assumed to be images of fertility.

It was believed that she oversaw marriage, childbirth and assisted with child-rearing.

St Paul caused a riot on the second of his two visits to Ephesus when he preached against the Artemis cult, to the disapproval of the local silversmiths whose trade depended on it. It was quite something for us to sit in the still largely preserved Great Theatre from where he delivered his sermon. Other less authentic bits of Christian history is the House of Mary built to commemorate the house she was supposed to live in, and the vast Basilica of St.John built by Emperor Justinian in the sixth century over the traditional tomb of the apostle. There is a superb model of what the Basilica must have looked like and there is an undeniable atmosphere in the House, the result perhaps of the many prayers that devoted people have offered there.

We saw more mundane signs of the Ephesus that was once a living reality, such as the 1st-century Roman latrine and the remains of a brothel, once a large building of two floors. More interesting was the huge library and mausoleum built 92-114 A.D. by Tiberius Julius Aquila, in memory of his father, Celsus Polemaeanus. Once the home of 12,000 scrolls, the façade of this two story building has been restored and as you approach it, makes an awe-inspiring impact on visitors such as ourselves.