This handsome city based on an old trading port and situated on one of many coastal islands has a special attraction for my wife and I. We visited it in the first years of our marriage and before our first child was born and it was the first time we had travelled abroad together. We stayed at the Bristol Hotel – which I see is still in business -for just a couple of nights. We did the usual things, walking by the Hanseatic wharf Bryggen and the fish market and travelling on the mountain cable railway so that we could visit Edvard Grieg’s summer residence at Troldhaugen. The city has a history of appalling fires, the worst being in 1702 when many of the wooden houses were destroyed, but each time the houses have been rebuilt in the distinctive Norwegian style, painted in a variety of pastel shades.

A city with a population of a quarter a million, Bergen is now a centre for the enormous Norwegian North Sea gas and oil industry and its international airport at Flesland is the main heliport from which thousands of off- shore workers commute.

A very different scene from the one we briefly knew and fondly remember. Its history and present contribution to the arts was honoured however when in 2000 it became the European City of Culture, reflecting the importance of the annual Bergen International Festival which has been going for fifty years and will happen again at the end of this month.

From Bergen we travelled on the Sognefjord ferry to spend some lovely days in the small town of Balestrand at the end of the fjord, which was a wonderful relaxing time. We remember walking in woods full of multi-coloured fungi, viewing a glacier (still there I wonder or a victim of global warming?) and an old church built like an upturned Viking ship. Although we try to go to new places rather than organise nostalgic trips, I entertain fantasies about returning to Balestrand one day.

A magical place for me and hopefully not only because of the fabulous breakfast table which began – and sustained – our days!

We passed through Bergen a year ago on our way to Lapland for a winter holiday but had little time to catch up on our experience of 45 years ago. But it’s a lovely place to visit and a splendid introduction to the cool beauty of Scandinavia. 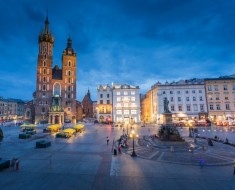