At least I have been there, however briefly, and so Barcelona can be included in ‘my’ European cities. 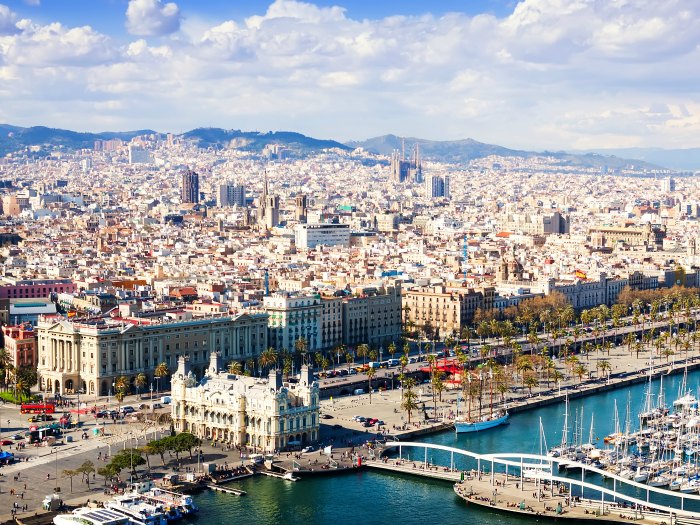 But our visit to this distinct Catalan city was only a matter of hours, and yet it was long enough to confirm Barcelona’s great reputation as a beautiful, lively and vibrant city. It was a wonderful sunny day and as we strolled through the streets, observed the famous art deco buildings and those of Gaudi, visited the Picasso Museu situated in medieval mansions, and of course sampled the famed Catalonian cuisine, we responded to the immense attraction of a city which is now home to people of many nationalities.

Barcelona has had an eventful and often painful history. Romans, Visigoths, Moors and Franks, occupied the area in the first millennium until it became the key city of the Catalonia region under a dynasty founded by a ruler with the evocative name of Wilfred the Hairy (Count Guifre el Pelos) that lasted almost five hundred years. The Catalan connection helps to define the city, which is no doubt why the Bourbon King Felipe V banned the writing and the teaching of Catalan in the early eighteenth century. The demands for autonomy however were never suppressed and remain today as a unifying element in the culture of an otherwise cosmopolitan city. In fact during the brief Second Spanish Republic created in 1931 Catalonia declared independence. During the Spanish Civil War the city was governed by anarchists and Trotskyists. Churches were destroyed and more than 1,200 priests, monks and nuns were shot.

The city was frequently bombed by Franco’s forces. Under Franco counter violence continued and many purges and executions took place.

The 1992 Olympic Games marked a new beginning and confidence for the city with an international affirmation in dramatic contrast to its violent history. Its extraordinary tradition of fine buildings was given a new lease of life, right down to the coastal area, and the completion of Gaudi’s Sagrada Familia Cathedral continued, despite the disapproval of art specialists who believe the original extraordinary design is being undermined. But the realisation of Catalan independence is still a political objective for many traditionalists, even though they are now joined by new arrivals from Europe and notably from South America, in search of the good life.

Barcelona has deservedly become a major if not the major Spanish city (Madrid would not agree) and attracts an enormous number of tourists, of which my wife and I were numbered for a little while. We have ambitions to return for a longer visit. See the euroresidentes Guide to Spanish Cities for much more information, and get in touch if you can with my youngest Anglo-Spanish grandson for the know-how on what is ‘the best football team in the world’!