After this fairly breathless survey of Spanish composers we can now turn to Spanish performers, and the first of these must certainly be the cellist Pablo Casals. In his lifetime loved and revered throughout the world, he was born in El Vendrell, Catalonia in 1876, showed an early fascination with the cello and became the instrument’s foremost exponent of his generation. In 1893, Albeniz heard him playing in a café, gave him a letter to the private secretary of Cristina, the Queen Regent who granted him a royal stipend to study in Madrid. His career, developed, as brilliant cellist (especially in Bach), teacher and soloist with the major orchestras of the world, as well as a conductor himself. His deeply felt performances becoming legendry. As with so many other artists of his generation he was a republican (despite The Queen Regent connection – and later playing before Queen Victoria ), was so utterly opposed to Franco that he left the country and eventually settled in San Juan, Puerto Rico.

Vowing never to return to his home country until the regime was banished, he in fact died before that happened. But he was posthumously honoured by the government of King Juan Carlos in 1976, three years after his death at the age of 96.

He founded the Prades Festival in 1950 and was its director until 1966. The following year he inaugurated a Festival in San Juan (his mother was born there). He was by then 80 years old and after a colourful love life, married one of his young pupils, Marta Montel. He made many recordings some of them including those of the famous trio he formed with Jacques Thibaud and Alfred Cortot, some of which are still available. Serveral of his many master classes in the 1960’s were televised.

The British music critic W.J.Turner heard him play in Vienna in 1913 and wrote later in a letter: ‘his playing…is one of those rare things that may only come once in a lifetime…it may be centuries before there is anyone like that again.

He is a funny little fellow only about 30 and plays with his eyes shut and practically the whole time, every note every pause and tone colour is reflected in his face and to hear him again, to draw the bow across ppppp, is a revelation’. 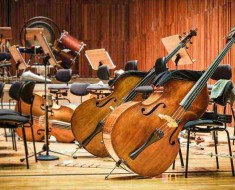