…an unkind voice might say, ‘is there any?’ Well, there wasn’t much after Henry Purcell (1659-1695) whose ‘Dido and Aeneas’ is the first English opera and is still performed and recorded. He composed in the Italian baroque style; together with his church and state music, there are five masques- more theatre music than opera. The log gap that followed his short life extends right down to the twentieth century, unless we include the operas of George Frederic Handel whom we have met, but though living in England, was German by birth. There has been a marked revival of many of his operas in the last fifty years, and many of them have been recorded. (His ‘Alceste’ is presently part of the English Touring Opera programme).

But then Benjamin Britten burst onto the scene . His first opera, Paul Bunyan, was written in 1941 during his years in the U.S.A, but it was the first performance of ‘Peter Grimes’ in 1945 which ushered in a new era of English music for the stage.

(I have had the original recording conducted by Britten and own the Colin Davies performance which I saw at Covent Garden). It was a enormous success that was never exceeded by any of the many operas that were to follow – chamber operas such as ‘The Turn of the Screw’, and others on the same scale as ‘Peter Grimes’; ‘Billy Budd’ is now enjoying rave revues at English National Opera, with Simon Keenlyside in the name part. I have seen the Opera North’s production of ‘Gloriana’ several times and although its first performance at the time of the Queen’s Coronation confused an audience who had come to praise royalty rather than be faced by its fallibility, years afterwards it has come into its own.

Although Britten was criticised for a fluency that some felt was superficial – and certainly works in various genres poured out of him without pause until his tragic stroke that shortened his life – he remains the most significant and distinctive British composer of his generation.

A complicated man, his long relationship with Peter Pears was an inspiration for much of his music. Micheal Tippett (1905-1998) had an uneasy friendship with Britten (as did many others). His house, now part of a university, is near to where we presently live. I find his music difficult and his operas are not helped by the fact that he wrote his own (sometimes obscure) librettos. But there is a quite unique and stirring energy about his compositions that I find highly emotional. Hear the Ritual Dances from his first opera ‘The Midsummer Marriage’, and you will see what I mean. 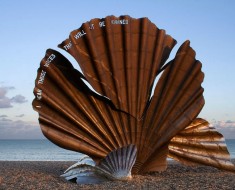