World famous tenor, Placido Domingo has been varying his roles in recent years, moving into a repertoire that demands a richer deeper sound than the more traditional Italian ones. He has recorded as well as sung on the stage, Verdi’s Otello and Wagner’s Parsifal. Apparently now he is going to sing some baritone roles, notably Doge of Genoa in Verdi’s early opera, Simon Boccanegra at Covent Garden and La Scala in 2009. Interestingly he sang the tenor’s part, Gabriele Adorno, in the same opera at Covent Garden ten years ago. So this amazing Spanish tenor who has also become an orchestral conductor, adds yet more roles to his enormous repertoire.

This change of timbre is not unusual. The great Enrico Caruso (1873-1921) had an enormous range and even now hearing the old recordings of him you can hear the dark edge to his peerless voice. The Oxford Dictionary of Music says of his voice that ‘it was of sumptuous resonance, mellow and almost baritonal with an exquisite mezzo voce’.

It’s not only tenors who can make a change. Dame Janet Baker began as a contralto but was soon singing as a mezzo soprano, whereas Christa Ludwig, Grace Bumbry and Shirley Verrett all turned from mezzo to soprano and then as they got older, returned to their previous range.

The ‘Three Tenors’ road-show is already a thing of the past. Pavarotti clings on to the remains of his remarkable career and Jose Carreras is still performing but no longer on the operatic stage. Only Domingo, now in his late 60’s, goes from strength to strength. The famous trio have given notable performances in huge arenas in various parts of the world since their first collaboration at the ancient Baths of Caracalla in Rome held on the eve of the 1990 FIFA World Cup final.

That first concert was held to raise money for Carreras’s foundation and also as a way for his contemporaries, Domingo and Pavarotti, to welcome their friend and colleague back to the world of opera after his successful treatment for leukemia. But if that wasn’t the case, and the famous three were still touring the world, Placido Domingo’s decision would have closed the show.

As Martin Kettle wrote in The Guardian last week, ‘The Two Tenors and a Baritone’ does rather lack the resonance of the original! 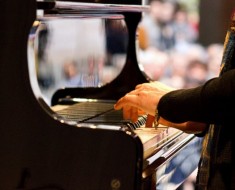