‘The only consistent characteristic’ of this American composer’s music, says one critic, ‘is liberation from rule’, or as the conductor Michael Tilson Thomas puts it, ‘Ives music is in turns ‘gleeful, goofy, ecstatic, and nostalgic’. Firmly earthed in the old Yankee tradition of home, church and country, his music employing the normal forms of classical music, is utterly and uniquely his own. He turns incoherence into coherence, madness into sanity, dissonance into harmony. Deeply affected by his childhood experiences in small town America and his love of his band-leading father, his music is full of the echoes of what he realised was a fast changing world.

I have had for some time a recording of his second symphony (‘for a large orchestra’) and have recently bought a remarkable selection of seventeen of his orchestral, choral and vocal music selected by his champion, Tilson Thomas (Charles Ives: An American Journey – RCA label). Its not music to sit back and wallow in but nor is it hard to listen to and full of constant surprises.

None more so than his setting of ‘General Booth Enters Into Heaven, a poem by Vachel Lindsay, with the repeated refrain by chorus and baritone of the evangelical cry ‘are you washed in the blood of the lamb?’, boisterous like so much of his music but somehow sober as well. This is seriousness with a smiling face. You can never be quite sure how much Ives is taking you for a ride, but if he is, the journey is exhilerating.

The music is often bass and brass heavy – you can hear the influence of his father’s travelling bands, several of which seem to be playing all at once and in different keys. It is restless music often but endearing and you feel as if you are meeting a real person with an intensely individual voice : a loud one but gentle too, and very moving.

Much of Ives music was never performed in his lifetime, and composing only at weekends he may never have expected it to be. Perhaps now he is coming into his own and in what little I have heard of his music, I can recognise the seeds of later American compositions including the famous musicals. The music has to be understood, but cherished too. 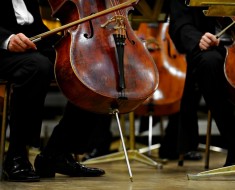