Ministry of Transport to take action against Iberia for its treatment of passengers
The Ministry of Transport has announced that it intends to carry out an investigation into how far Iberia had fulfilled its commitments under the law to passengers. After three days of chaos with thousands of passengers affected, cancellations and delays to flights operated by Iberia look set to continue.

The Minister for Transport, Magdalena Álvarez, announced the measure yesterday during a press conference in Madrid-Barajas airport. She said that Iberia’s behaviour towards it passengers had been inexcusable referring to three flights to Buenos Aires, Lima and Montevideo. On these flights passengers had already boarded the plane when they were informed by the pilot that he had gone over the permitted time for flying and were forced to get off again.

Yesterday the company cancelled 56 flights and the rest of its flights were subject to delays.

A spokesperson for Iberia said that the company would provide all the information required and insisted that it had kept the Ministry of Transport fully informed at all times.

When action is taken against a company the first step is to ask for information on the situation followed by justification of its actions. The next step is to decide on sanctions if it is found to have acted incorrectly. According to the law on air safety the fine for a serious breach of the law is between 450,000 and 4.5 million euros. 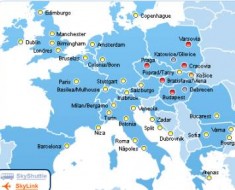