Giles Fraser is for many of us, the acceptable face of Anglicanism. He became a national figure when the Occupy protest in June 2011 was forced by the police to move from their preferred site – the London Stock Exchange –to St. Paul’s Cathedral. He was the only member of the chapter staff there to support London’s version of what has become an international movement protesting at corporate greed and social injustice. It was an embarrassment to the Cathedral (and a loss of income), but Fraser said he was happy for people ‘to exercise their right to protest peacefully’.

He regretfully resigned from the Cathedral staff in October 2011 and is now parish priest in Newington, S.E. London. He regularly does the four minute slot ‘Thought for the Day’ on BBC radio and writes a Saturday column every week in The Guardian. Yesterday he was in holiday mood, but writing grumpily about the misuse of words. He disapproves of the way ‘literally’ looses its sense when applied imprecisely.

His children are amused at his ‘middle-aged fussiness’.

The word that raises my ire is ‘incredible’. It’s widely used in the media and by politicians and rarely means what it says. ‘Surprising’ is fine when you want to express astonishmen, but that’s not the same as ‘beyond credibility’. I talk to the blank face of the television frequently (and foolishly), and inevitably when someone’s enthusiasm exceeds the real meaning of the word. It happened yesterday in the BBC’s ‘Springwatch’, which like so many of the reality shows on the box is as much about the presenters as the subject they introduce, and in many cases more than. In two minutes, two presenters said ‘incredible’ three times. In each case the word was misused. The whole programme is devoted to making the secret world of nature visible – and credible.

Another thing about the radio and TV that makes me ‘fussy’ (well cross, actually) is the phrase ‘you know’ , which can punctuate an interview. We don’t know! That’s the purpose of the interview which is presumably intended to convey some new information or opinon to listeners or viewers. Perhaps it’s a way of ingratiating the speaker, a sort of pally moment that brings together speaker and listener. Not for me. It’s sloppy speech.

Giles Fraser’s children would have to say I was ‘elderly fussiness’, and probably they would be right. There are far more serious things to be concerned about. Even so……. 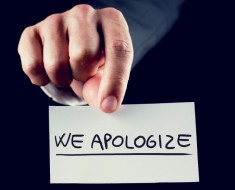