This is the heading of an article by Alok Jha which I have been reading (the invaluable ‘Guardian’ again). It surveys the link between age and health. Here are some extracts.

‘Between the ages of 30 and 80, a person will lose 40% of their muscle mass. The story is similar with our bones: the strength and mass of the skeleton rises until the early 30’s, after which men will lose about 1% of their bone mass per decade. Women lose bone in the same rate in the 10 year run-up to menopause, but, on reaching the menopause, their rate of loss jumps to about 1% per year for several years before going back to the same rate as men. …Weaker muscles mean an inability to move quickly or to react appropriately to prevent a fall, for example…. Perhaps the most striking degradation happens to the brain. After the age of 40 the brain decreases its volume and weight by 5% every year….whilst some people will be relatively unaffected, others will get more forgetful as time passes..’

All this, apparently, ‘depends on a variety of factors, from genetics and what kind of environment we have lived in, to the level of medical care available to us and even our level of education’.

Evidence presented to the House of Lords Science Committee’s Inquiry into ageing in 2002, indicated that health expectancy seems to be growing more slowly than life expectancy in Britain, and that the period of debilitating illness at the end of our lives was, in fact, increasing. Masses of research – especially into genes – is in progress. Better prospects for later generations perhaps than for the present generation of older people.

If we have never bothered much about our long-term health, obviously the ageing process can be complicated and unpleasant, and we are back to our old theme of sensible eating and regular exercise. But also, perhaps, we have a mission, which is to help the young to live well so that when they are older they can continue to do so.

(Obesity amongst the young is getting so serious in the U.K. that there is talk of the N.H.S. offering surgery to children over 14 to save their health in later age).

We may have done pretty well; we want young people to do even better. And that gets us into campaigns and politics. No bad thing. 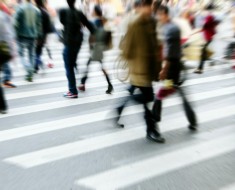