There’s been some attention in the media recently about violence in the home not, as one might assume, amongst younger but older people; the man the perpetrator and the woman the victim. Mary Mason, director of Solace Women’s Aid in London says ‘older women often tell us that they don’t think they will be believed when they go to agencies for help. Similarly Deborah McIlveen of Women’s Aid : ‘in our experience older women face additional barriers accessing services. People do not expect those over 60 to be experiencing domestic violence.’ The Police Officers’ lead on domestic Violence, Carmel Napier, confirms people’s reluctance to go public about their situation.

A total of 96,000 cases where adults were thought to be at risk were referred to adult safeguarding services in England in 2010/11. Only 80 of these resulted in serious case reviews, and half of these involved elderly people. An article in The Guardian (24/12/2011) tells the story of one such woman, 81 years old, who phoned the police eight times over a period of nine months before eventually dying of her injuries.

There had been a long period of abuse. Agencies were aware of these, but although on one occasion the husband was arrested, no further action was taken.

I wonder how common this is, and why it is. There will be a lot of causes, some of them the environment of a marriage and little to do with ageing. I think one problem might be that life can become barren in the last years, and perhaps particularly for men. It’s a generalisation, but women build and maintain relationships outside of marriage more easily than men, many of whom had friends at work. Retirement can leave a huge social gap which is difficult to fill. I know of one woman in her eighties who shops every day at the local Co-op. ‘I’ve done it for years’, she says, and, referring to the shop assistants, ‘they all know me’.

Shopping is an important part of her daily life.

I travel on the same bus during the week and there are several elderly man going down to town, if not to shop, certainly to get out of the house and mix with the crowd. With illness and the usual aches and pains involved in getting older, mobility becomes more difficult. And home – perhaps – becomes a prison, not a creative place. Boredom then breeds frustration and a sense of incarceration and it may not be so great a step from that to begin to take it out of your partner, first by verbal abuse (this apparently is how it often starts) which then turns to physical violence. Older people living on their own with their children no longer living near at hand, need special thought and care.

Most of all they need friends. 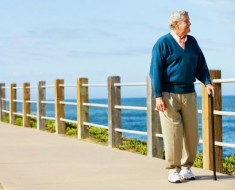