1. If the Sunday alter Easter is traditionally called ‘Low’ Sunday, what can we call the Sunday alter Christmas? ‘Loyalty Sunday’ perhaps? Or, ‘Thank God Aunty Flo has gone back to Eastbourne and we can watch what we want to see on TV Sunday’? Or, ‘could you now find time, Dear, to fix the dripping tap in the bathroom Sunday’? If you have Spanish connections as we do, the problem is solved, it’s ‘Three Kings Sunday’. For all of us it’s, ‘getting back to normal Sunday’.

Here are words from the collect for today – ‘fill the world with your splendour and show the nations the light of your truth’.

And here this morning is a glimpse of that splendour as a little boy only thirteen months old and at the wish of his parents is brought here that his life may be blessed by the friendship of God and with the prayers and acceptance of the Church. Baptism is the door into the church, but it’s like one of those swing doors that pretty smartly turns you out, back to the real world, as quickly as it welcomes you in.

2. It wasn’t a good time to be born, in the time of King Herod. He’d done some good things during his reign, but for the last ten years of it – suffering in brain and body from arteo-scelrosis, he had become increasingly tyrannical and jealous. The survival of his dynasty became an obsession with him. If his power was limited by Rome, he was determined to hold on to what remained of it. He changed his will to favour whoever was his current favourite as many times as others change their socks.

Patient Rome was getting weary with him. When even a whiff of a potential threat to his authority was in the air, the mangles of his deranged mind began to rotate.

What a naïve question to ask of this pragmatic pagan, ‘Do you have any idea where the King of the Jews has been born’! Only wise men could be so foolish. And innocent. It was like saying to someone with a broken gas main ‘I can’t see the hole, would you lend me a match?’ Near now to the end of his life, Herod’s natural instinct to survive emerges from his fractured mind and he says to the travellers ‘when you find him, let me know so that I can worship him’ ,and says to himself ‘ so that I can kill him’. Months later, Herod himself is dead.

Especially when they hide behind smiling faces.

It’s a juxtaposition of opposites this morning : biblical reading and church event. We read about the ancients searching for truth, about an attempt to suppress truth and preserve power but then we meet for the presentation of this little boy to the gracious God and Father of Jesus, who has the real power but holds it in gentle hands.

This first year of Daniel’s life as been fraught with world problems like so many others. The Psalmist’s cry ‘ Do not put your trust in princes, mortals in whom there is no help’ has a bitter feel to it as we reflect on the conflicts and dangers of peoples, nations, tribes and religions. Well it’s not a straight contest between human and divine governance, as the psalmist with his love and praise for God (Psalm 146:3) suggests. In affirming God his theology has a political dimension. The Lord will set the prisoners free, open the eyes of the blind, lift up those who are bowed down, he watches over strangers, upholds the orphan and the widow. That’s how God is, but that’s how we wish the world was governed too – and it isn’t, and we pray and plead and campaign and vote for it to be different. Three things about the real world –

People of goodwill will always be disappointed with the world as it is.
Jesus wept over it
Paul tried to get the young church to be free of it
The Church eventually settled on an unconvincing accommodation with it.

People of faith will always see more in it than others
Jesus saw God ruling it. Amongst the poor!
Paul said that somehow God was ruling through the world’s rulers
The Church was crazy enough to believe it could convert the world

People of hope will never let go of it.
The first Christians interpreted the death of Jesus not as the condemnation of the world but as its salvation.
Rotten and fallible to its core, perversely we also believe that it is basically good.

So we should never say (though often we do ) ‘its like hell down here’ ,because Jesus has said ‘ it can be like heaven’. ‘Pray like this’ he said, ‘Thy will be done on earth as it is in heaven’

Love came down at Christmas. And love has remained. The world (this composite word!) against most of the evidence is redeemable. All of it. All of us. Each of us.

This little boy baptised today is discovering this world and sometimes we fear for him. Now at his tender age he is full of vigorous wonder. Having learned to walk, he now runs his feet almost off his legs, his pointing finger and his eager face high as he identifies some new object or experience and all the time he tests new sounds of his own on their way to becoming words. We borrow his eyes a little and watch his continually enlarging encounter with the world about him. Although of course we can’t share his innocence, we can be open to it and reach out for what is new, pure , alive. It’s not surprising that Jesus once took a boy off the street and said to the jaundiced and tired minds of the people around him, ‘this lad is what the Kingdom of God is like’.

We have no other option – the world is where we practice our faith and follow our discipleship. We resist the false, trite alternative that suggests God sets religion in opposition to real life and communicates in a language known only to the initiated. Instead we use the street language of Jesus. He came to this world, the one this little boy was born into. All of us and all people have our proper habitation on the earth. We share in the broken but beautiful body of humankind.

We shall go on being disappointed by the awful things people do to each other and pray and shout our protest when they do. We shall nearly give up sometimes. We shall say ‘Oh Lord, how long?’ and will stumble as we try to say anything positive to people who say ‘;where is your God?’, for there may be times when we have lost sight of him too. But we will not turn back or give up.

For the story of Christ ‘s coming is true and that his presence remains is true, true for everyone, and in that truth this little boy will be baptised. Jesus: a baby, a boy, a man, a peasant King, the Prince of peace and the power of any tyrant king shall not prevail.

So it is ‘back to the real world Sunday’ and ‘forward with Jesus Sunday’ .So be it. 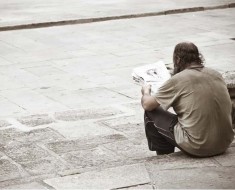 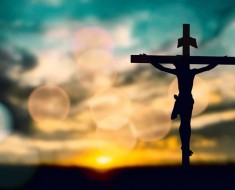 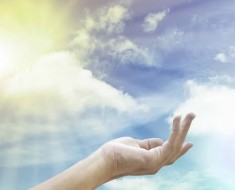